Just as electronic music and rave culture in the US evolved through time, the EDM scene across Europe today also boasts a unique mix of subcultures and styles.

As a US raver, experiencing the scene across the pond can feel like an adventure. World-renowned festivals like Tomorrowland, Parookaville, Ultra Europe, and Amsterdam Dance Event  attract dance music lovers from all over Europe (and the world), truly bringing to light the unifying power of music.

What’s more, the ease of access to travel within the EU makes it a breeze to explore unique events across multiple regions and through the lens of different cultures. The best part of it all is that one can simultaneously feel at home while also seeing a familiar environment in a new light.

There are several twists that set the electronic music scene in Europe apart from North America, but these five distinctions particularly stand out: 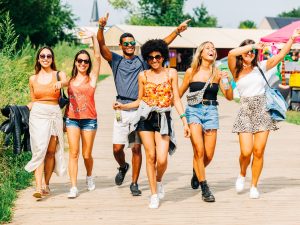 Unless you don’t mind drawing attention in a crowd, US travelers may want to take note of this one in particular. While eccentric outfits play a big role in US rave and festival culture, people tend to stick to simpler outfits at European events.

That’s not to say that there’s no room to rock a creative style; however, it might be a good idea to swap out the pasties and 6-inch platforms for something more practical. Fashion choices vary based on the type of event and location, but glitter, creative hairdos, merch, graphic t-shirts, and a stylish pair of joggers make popular choices at all types of events.

US ravers may be surprised to learn that the custom of making and trading kandi is specific to North America. While it’s possible to spot a bracelet or two in a crowd at larger festivals, kandi is uncommon at most electronic music events in Europe.

Yes, that’s probably a little disappointing to the kandi kids out there, but while the kandi may not be around, colorful personalities and good vibes are never in short supply.

In a dimly lit hallway of a gritty techno club in Frankfurt’s industrial district, I paid a compliment to a flow artist spinning poi. The Frankfurt local was thrilled to meet a foreign raver in her hometown venue.

The conversation that followed revealed many insights about German rave culture, such as that while they present it in a different way, German ravers bond over the same values of freedom, creativity, and connection that US ravers do.  That would have remained a mystery had I chosen to skip the interaction.

Outward appearances and language barriers can make crowds appear intimidating, but a small effort to communicate with local ravers is more often than not rewarded with a warm welcome. People are always eager to share their stories and connect with people about things they love,  and the thrill of sharing that connection with someone from across the world is priceless. 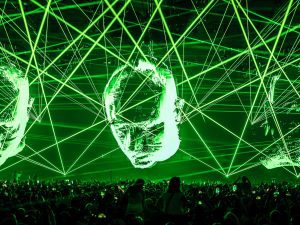 Kandi and PLUR culture is closely tied to the rave scene’s underground roots in the US, perhaps explaining why this aspect of rave culture hasn’t taken root in Europe.

The underground does also play a big role in the history of  European dance music culture, but the scene as a whole integrated with mainstream culture at a much earlier stage than in the US.

That’s why it’s not uncommon to hear house music and trance hits in TV commercials, pulsing in the background of popular TV shows, and playing on the radio.

Electronic dance music also isn’t confined to the rave or club dancefloors (aka the “discotec”). Big room anthems, house music, techno and tech house can be heard pulsing through speakers at neighborhood bars, cafes, and sometimes even the neighborhood grocery store.

Broadly speaking, it’s possible to hear many of the same sounds on European dancefloors as in the US. Beneath the surface though, genre landscapes across Europe follow their own distinct trends.

Whereas a techno resurgence is trickling its way into the US today, techno has been going strong in Germany, the UK, France, Italy, and many other parts of Europe since the very beginning.

Trance also remains popular in the UK as well as Northern and Central Europe, which isn’t surprising given that these regions gave rise to trance legends like Armin van Buuren, Cosmic Gate, Gareth Emery, and Above and Beyond.

Bass music is still fairly new to the European EDM landscape, although the scene is on its way to taking root. This is especially true among circles with a taste for heavier sounds, such as in Germany and the Netherlands.

Hardstyle and Hardcore are also very much alive and well among these circles, with festivals like Defqon .1 going strong for nearly 20 years. 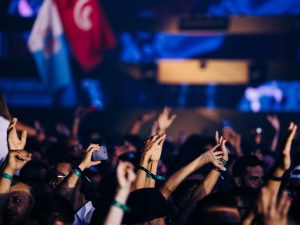 In the US, it’s hard to imagine going to a festival or rave without a phone. After all, digital media plays a crucial role in the industry today, and recording videos and pictures is how many people keep the best moments of a festival experience alive.

However, when raving in Europe, you’re likely to notice significantly fewer phone screens in the eye line between the stage and the crowd.

In stark contrast to the social media-crazed landscape in the US,  a considerable part of the European rave scene today focuses on creating spaces where people can get away from digital noise.

Some venues explicitly prohibit recording videos or taking photos– as a matter of fact, some techno clubs in Germany even require attendees to leave their phones at the entrance.

It may sound austere, but the practice simply reflects a different attitude towards what role the rave scene plays in people’s lives. These measures are in place to make sure that raves remain a space where people can freely express themselves and let loose without concern over appearances or fear of repercussion.

Away from the prying eyes of social media, all there is to think about is the music and the connections shared with other ravers.