The news earlier this year that Atlanta’s Midtown Music Festival was canceled reminded many of the COVID-era postponements and cancellations that plagued ravers with anxiety and disappointment for almost two years.

But this festival wasn’t canceled because of the virus, logistics, or even financials.

While the official word from Live Nation was “circumstances beyond our control“, Billboard reported that changing gun laws in Georgia made the festival unable to ban guns from entering the festival.

The changing laws allowed for legal gray areas that would either encourage gun owners to try and bring in their weapons, bring expensive lawsuits if prohibited from bringing their guns, or at least cause a massive headache for festival organizers. Therefore, Live Nation would rather scrap the whole event than risk others’ safety.

Gun control is already a hot-button topic in the United States. Many cite the Second Amendment of the Constitution as their legal right to own a gun and protect themselves everywhere.

But with mass shootings so prevalent, allowing easy and nearly unfettered access to guns is clearly doing more harm than good. By September 2022, there had already been 501 mass shootings in the United States. Furthermore, as of September 27, 2022, 32,951 people in the US have died from gun-related injuries.

In August of 2022, a man was arrested outside one of the biggest bass festivals in the US, Bass Canyon at the Gorge, after he was seen putting two pistols on his body.

Reports claim he never attempted to enter the festival, but he was asking what time the event ended and where people would be exiting from. He was detained and local police suspected that they had stopped a potential mass shooting.

And with the lack of safety behind the purchase and regulation of guns and the power to kill hundreds of people in a matter of minutes, gun control needs to be reevaluated for the modern age.

Guns and music events do not mix, but what are the nuances of festivals and guns? 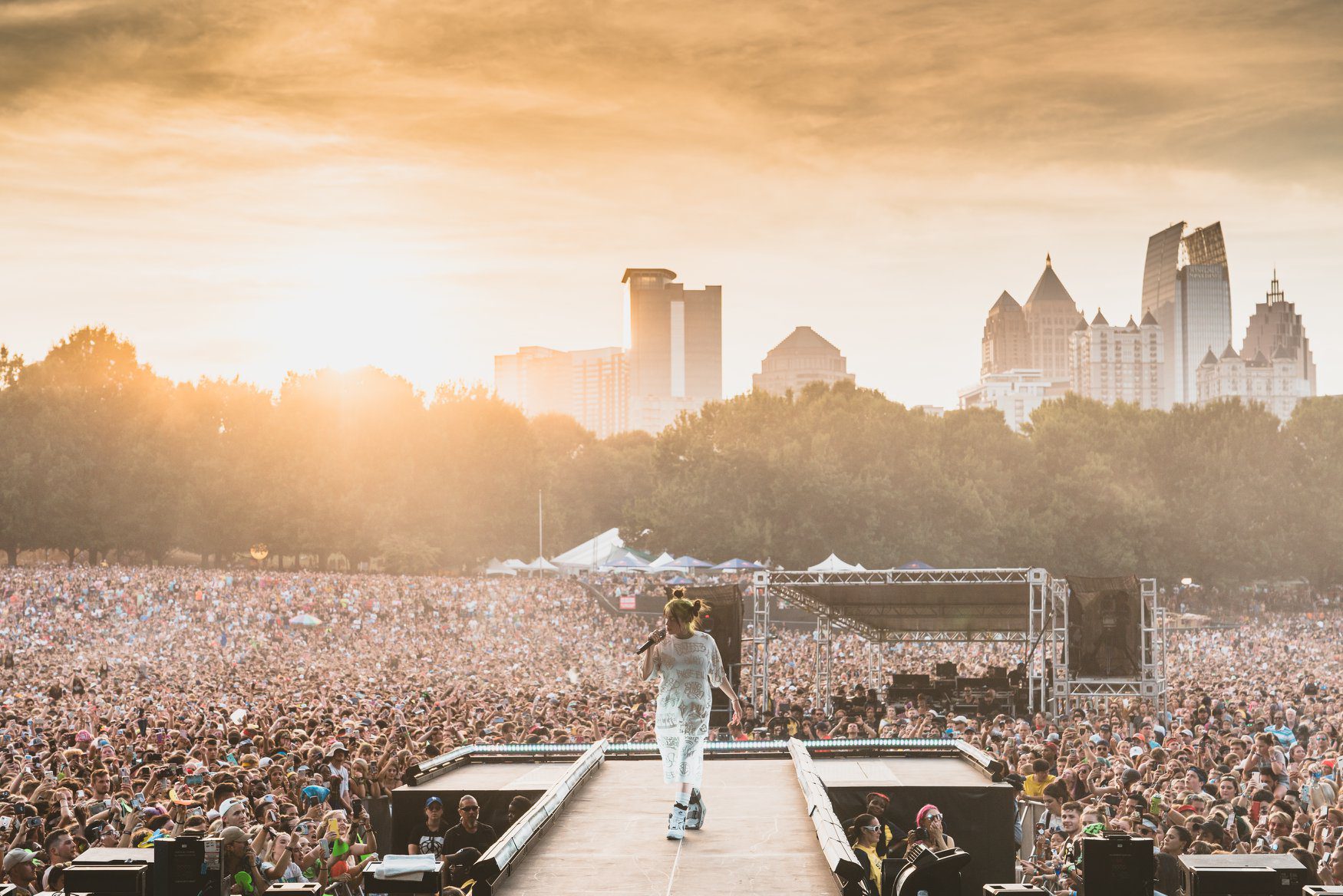 In Georgia, where Midtown Music Festival was to be held, the legal issues arose after a 2019 ruling expanded a 2014 Georgia law called the “Safe Carry Protection Act” also known as the “Guns Everywhere” law.

Piedmont Park, the venue slated for Midtown Music Festival, is public land and most music festivals only hold short-term leases.

But this isn’t a reason to panic as most music festivals will not host an event where gun owners are allowed to carry weapons. Some artist riders actually state they will not perform where weapons are allowed.

Security at almost all events screens for weapons with bag searches, metal detectors, and sometimes weapon-detecting dogs. Furthermore, most security above anything else will not allow weapons in under any circumstances, even if a legal carrier throws a fit.

But what this gray area does is create a precedent that allows legal carriers to successfully sue event organizers if they were denied entry into the festival.

Many blame gun rights activist Phillip Evans who had been pushing for Live Nation to drop their policy after unsuccessfully suing the Atlanta Botanical Garden, a fully public property, in 2014 before the 2019 expansion of the law.

University of San Diego Law Professors Laurence Claus stated, “American governments simply have not broadly prohibited the public carry of commonly used firearms for personal defense…but today’s high-capacity handguns are more capable of use for mass destruction than any of the crude and clumsy artifacts that our ancestors outlawed for being ‘dangerous and unusual’ … The more potential harm a weapon can cause, the more regulated its possession should be.” 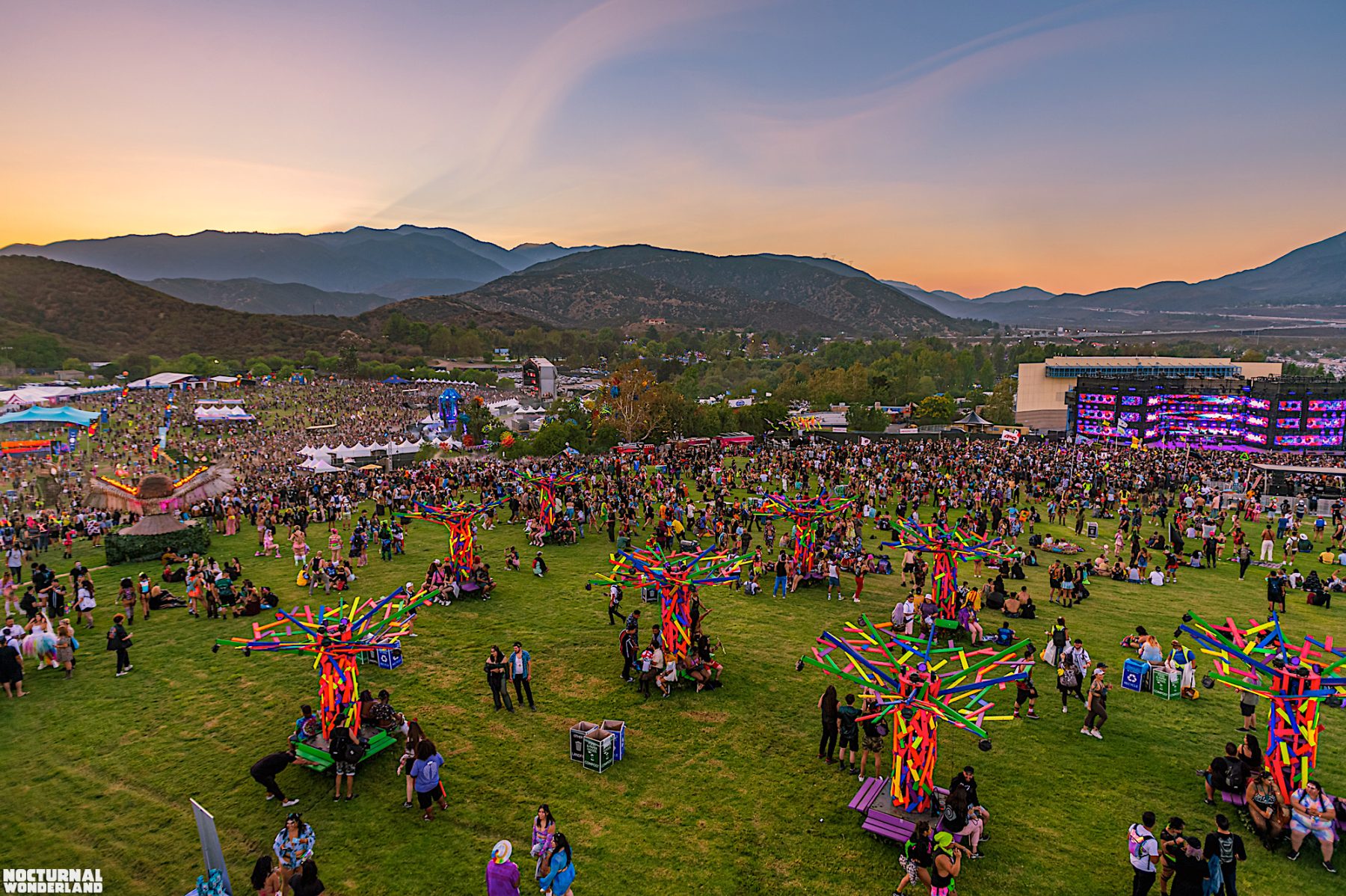 Safety of the Fans

In general, having guns at a music festival is a really bad idea. With large, potentially rowdy crowds filled with alcohol and illicit substances, emotions can run high or accidents can happen. Much like driving under the influence, no one should be carrying a weapon under the influence.

Gun accidents can and will happen under these circumstances, but what’s even worse is that responsibility is another gray area. In 2016, at an armed demonstration at Indiana’s Covington public library, one of the weapons was accidentally fired, causing minor damage to the wall.

If a gun could accidentally go off at a demonstration, it could happen at a festival, too. Furthermore, there have been reports of people under psychedelics experiencing psychosis and trying to hurt themselves or others.

A 2014 report showed that someone had ingested a synthetic hallucinogen on blotting paper they thought was LSD, but turned out to be an n-bomb and attempted to harm themselves. Even if someone does test their substances, tripping is not an easy journey and it’s best to keep weapons out of the equation.

Weapons are also an extreme distraction for fans. There is a phenomenon called “weapon focus,” where a person sees a weapon and gives their whole attention to it—to the exclusion of the other details of their surroundings.

It was observed in the 1970s and 1980s in crimes when witnesses often clearly remember seeing a gun but are hazy about everything else because all their focus was on the weapon.

Festivals are meant to be an escape from reality. With shootings at schools, movie theaters, and malls, a music festival should be the one place where someone can truly just let go and be free. The P in PLUR stands for peace and directly means creating a peaceful environment for the celebration of music. 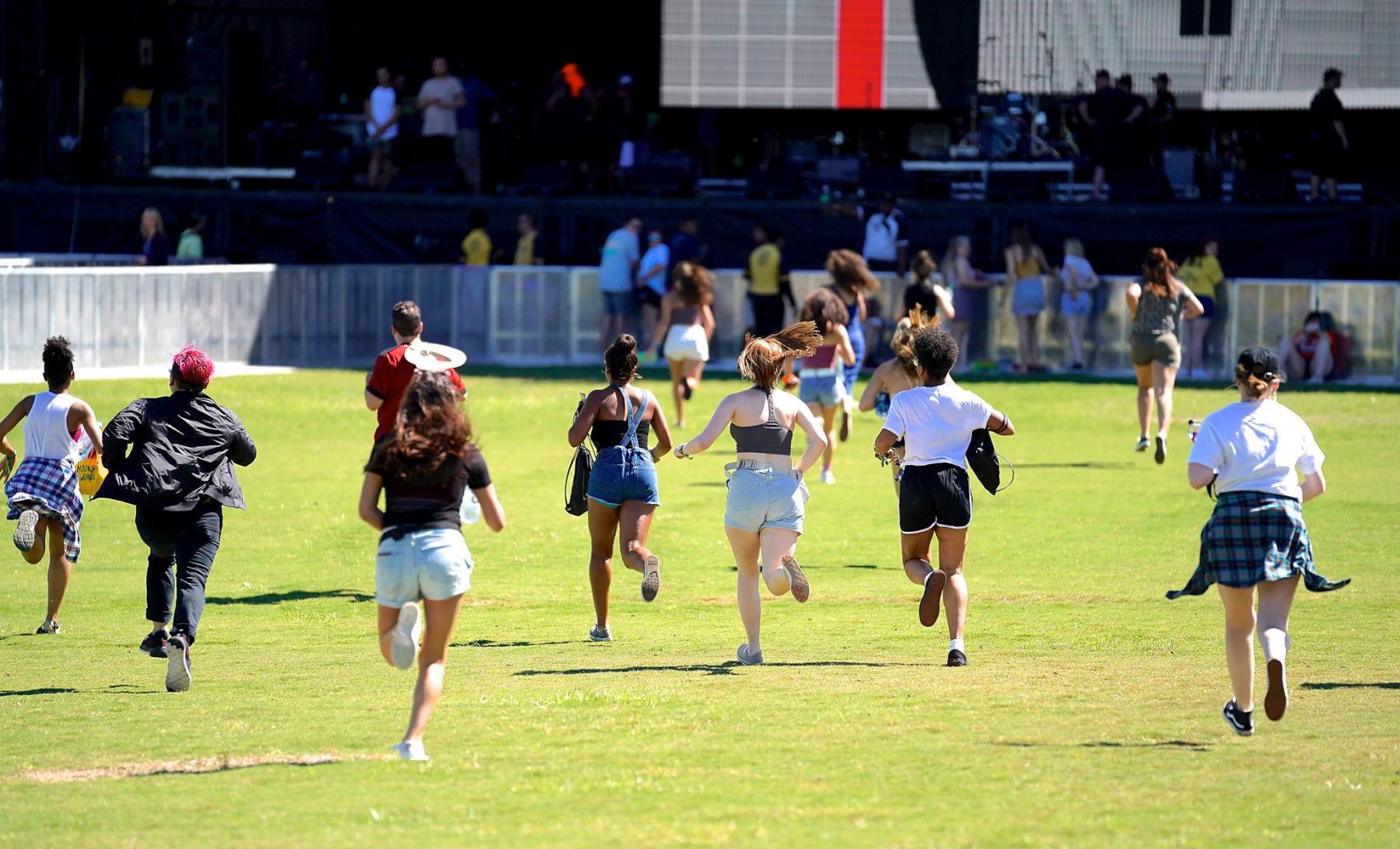 Guns Are Bad For Everyone

There are many reasons all parties in event planning and production should push for the ban on weapons overall.

The loss of income from festival cancellations is staggering for many cities. Last year, the city of Chicago received a portion of the revenue from the parent company of Lollapalooza to the tune of $305 million.

After the tragic 2017 shooting at a country music festival in Las Vegas, MGM Resorts International had to pay insurers $800 million in legal claims. The liability if an incident occurred and a festival actually allowed guns could have the potential to bankrupt a company.

Artists may also refuse to play at a festival if the venue did not ban weapons. Some artist riders actually have specific language saying that artists will not perform where gun laws mean attendees can bring weapons inside the venue.

We spoke to Justin Hawkes, born Justin Hellier, a well-known DNB artist from the largely gun-accepting state of Texas regarding his thoughts on operating in the music space among guns.

“I am a second amendment supporter for several explicit reasons. I am a die-hard antifascist. Ideally, guns shouldn’t be necessary, but no society is a utopia or impervious to corruption,” says Hellier

Hellier goes on to describe concerns about political violence within the United States as his primary conviction::

“With these beliefs so wholly amplifying the reality that gun violence in America is both an epidemic and political paradox, I am constantly weighed down by the grey areas we face as musicians operating in this space. The only answer is preparedness and understanding of the risk. One of the solutions, to me, is to take security as seriously as possible at venue entrances and festival borders. The other work-around is to hold events in states that will have the most reasonable laws supporting the safety of an event against gun violence. Whether this means petitioning states for temporary exceptions, campaigning for repeals of these applicable laws such as Georgia’s ‘guns everywhere’ law, or moving forward in a better-suited territory.”

To Hellier’s point on security, in the current scene, people working security are often getting paid minimum wage for a one-off gig. Trusting these people to monitor guns entering an event is irresponsible and dangerous.

We all know one friend or another who went through security and said, “they barely even searched me.” Plus, camping festivals are notoriously difficult or lazy as there are way too many spots to search including in the car and the camping gear.

Some people may actually take advantage of these laws to cause mayhem or chaos. Just a few months ago, a security guard at Lollapalooza sent a fake mass shooting threat text and post claiming she simply wanted to “leave work early”. 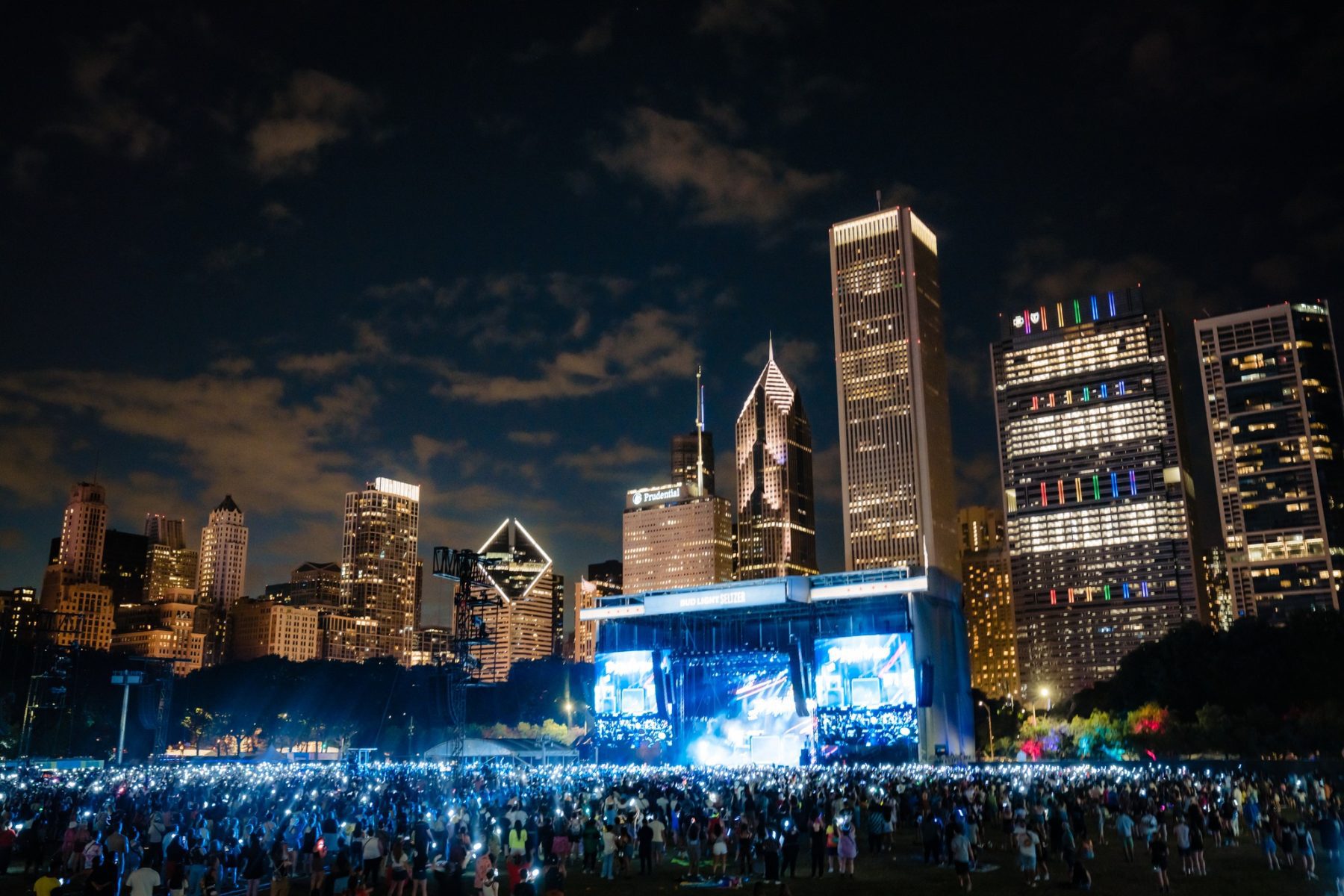 But this gray area could give someone the idea to test the theory or a lawsuit in order to exercise their right to get a quick buck. Worst case scenario, something seriously dangerous could happen and festivals cease to be a place of acceptance, safety, and community.

Laws need to be clearly stated and defined in order to create the musical escape we all desperately crave while at a festival. If not, safety, liability, and profits could all clash creating a disaster for both organizers and attendees.