It’s time for dance music lovers to gather at the beautiful Gorge Amphitheater for a weekend of dancing and magical mischief.  Although 2022 is only the festival’s second year, Beyond Wonderland PNW fans can anticipate many exciting acts by world-renowned artists. Plus there are several mold-breaking artists who also make this year’s lineup a particularly rich one.  Here are 5 trail-blazing artists not to pass up: 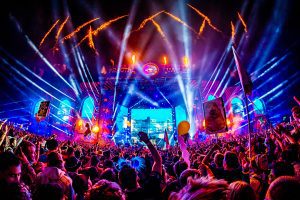 Known for his exuberant personality and equally saucy beats, Wreckno AKA Brandon Wisniski is one artist not to miss. Wisniski grew up in Michigan and started his journey in electronic music production in 2015. Since then, Wisniski has made a name for himself as a dynamic producer in the scene.

A multi-talented artist, Wisniski can also be heard rapping in many of his productions. He performs the spicy vocals in the popular 2020 hit single  “Medusa”, which he produced with GRiZ. He also appears in collaborations with Liquid Stranger,  Zeke Beats and many other diverse artists.

Bringing together fusions of hip hop, rhythmic bass, and wonderfully wonky wubs, Wisniski’s style is bouncy, sassy, and full of attitude. This artist’s unique sound makes a statement, and so does his story as an advocate of LGBTQ+ rights. As a queer producer, Wisniski contributes an important voice to the electronic music industry, and he expresses powerful anthems from his own story in his work.

This rising artist is a force to be reckoned with. A Hundred Drums (AHD) aka California-grown Gabrielle Watson is another artist who brings together music and advocacy for social rights in her productions, generating truly powerful acts of creativity.

In 2021, Watson produced an evocative EP called Enough is Enough, which highlights the stories of people confronting racism in the US –including her own. Watson uses passion to fuel her music, which is why it’s no surprise that she’s been described as a pioneer in the world of electronic music.

The AHD style is rhythmic, hypnotic, primal, and sultry. Sub-speaker rattling psychedelic bass, rhythmic vocals, and tribal hand drums come together to form a sound that calls to life the underbelly of the night.

Representing the Pacific North West at Beyond Wonderland PNW is Washington-native Weird Waifu. As another growing artist from the bass music scene, Weird Waifu aka Shianne Tramell breaks the mold with her unique self-expression.

In her productions, Tramell fuses experimental sounds, downtempo beats, and heavy basslines. The playful use of anime and manga elements is also a key feature of her work; in fact, the anime and manga world inspires the concepts behind Tramell’s merch and her on-stage visuals, and it can be found in her music and even the artist’s own eye-popping colorful style.

In addition to debuting at Beyond Wonderland PNW, Tramell appears on the Bassrush label, and she is making an entrance on more festival stages every year. She also regularly performs at regional shows throughout the PNW, where she has an enthusiastic fan base.

At only 17 years old, Southern California native Moore Kismet is a prodigious musical pioneer. The teen producer is a trailblazer in the industry not only because of their age, but also because as a non-binary pansexual black teen, Kismet is an outspoken advocate of LGBTQIA+ rights and diversity in the electronic music industry.

Kismet’s musical ingenuity also makes a name for itself. Their sound draws from many genres to create a bold  style all of its own. Influences from hip hop, pop, melodic bass and dubstep fuse to create a fierce and dynamic performance guaranteed to keep crowds on their toes.

Green Velvet is anything but a newcomer to the scene, and his legacy will live on for decades to come. Chicago-born Curtis Alan Jones stands amidst a prolific circle of electronic music producers who have made it big since the very beginning.

Jones first entered the industry in 1993 when he created Relief Records. He journeys through many styles, genres and monikers in his nearly 30-year-long career, but the Chicago native’s loyalty to the Windy City house and techno scene stands out through it all.

Jones’s authentic love for performing booty-shaking music speaks for itself. He is still packing out dancefloors all over the world decade after decade which is no small feat in this rapidly evolving industry. Groovy, bouncy, and timeless, there’s a reason these beats get shoes shuffling across time and space.

Author
Federica Brandi
As a creative, a child of an international family, and a world traveler, I've always seen myself as a constantly evolving mosaic. Throughout all the multifaceted pieces of my life, one thing has always been constant: My love of dance music. My passion for this scene drives me to explore EDM events all over my present home in the Pacific Northwest and beyond. love to share the experiences that come with being a part of the EDM family through writing and creative media! If you see me at a show come say hi and trade kandi!
Previous Article