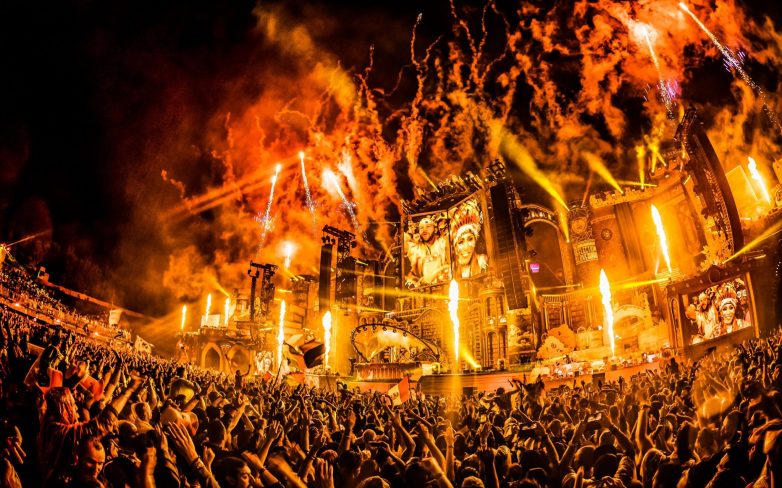 It is the place of dreams, created by dreamers. It is a place where music and magic overlap into a world outside of our daily lives. It is a place where love and acceptance for all prevail as hundreds of thousands gather from around the world to celebrate the beauty of life. It is a place where differences are set aside in place of mutual love: electronic dance music. This place is Tomorrowland, a place that is unequivocally the most beloved music festival in the world. As we celebrate fifteen years of electronic music history, let us take a journey back in time to appreciate the memories made and the evolution into the Tomorrowland we know and love today! 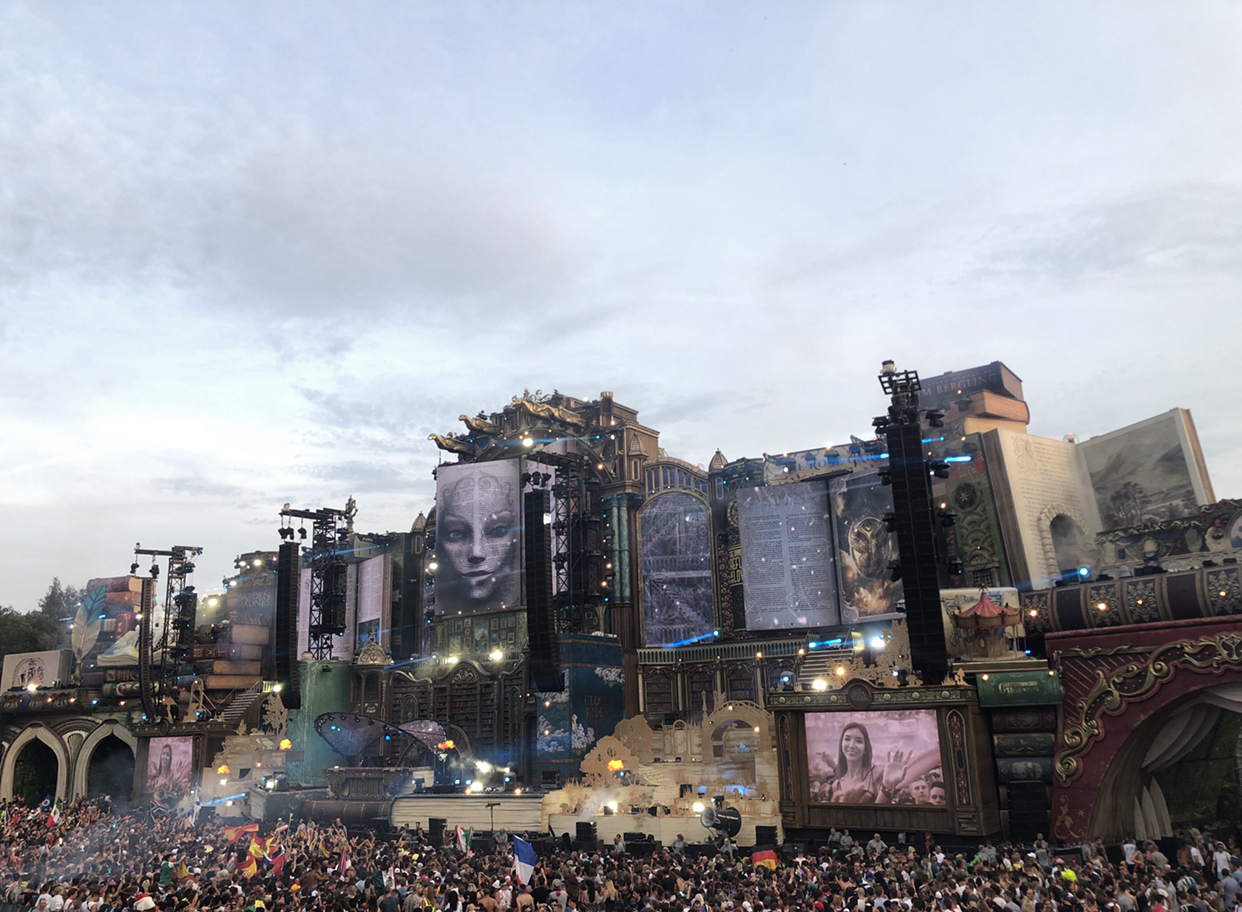 Tomorrowland celebrates its Fifteenth Anniversary with its most elaborate stage yet.

This last year, Tomorrowland celebrated a monumental anniversary as they returned for the fifteenth year to the beautiful location in Boom, Belgium as 400,000 people gathered over the course of two weekends in late July. In a celebration of the past, present, and future, Tomorrowland accordingly curated the festival around the theme The Book of Wisdom- a revival of the theme from the year 2012. For those that recall, the Tomorrowland Mainstage in 2012 was famed with transforming stage production forever with a stage display that was beyond its time in both technology and aesthetics. In true Tomorrowland form, creators drew on the throwback theme in an even bigger way and made their mark yet again as unrivaled in production. 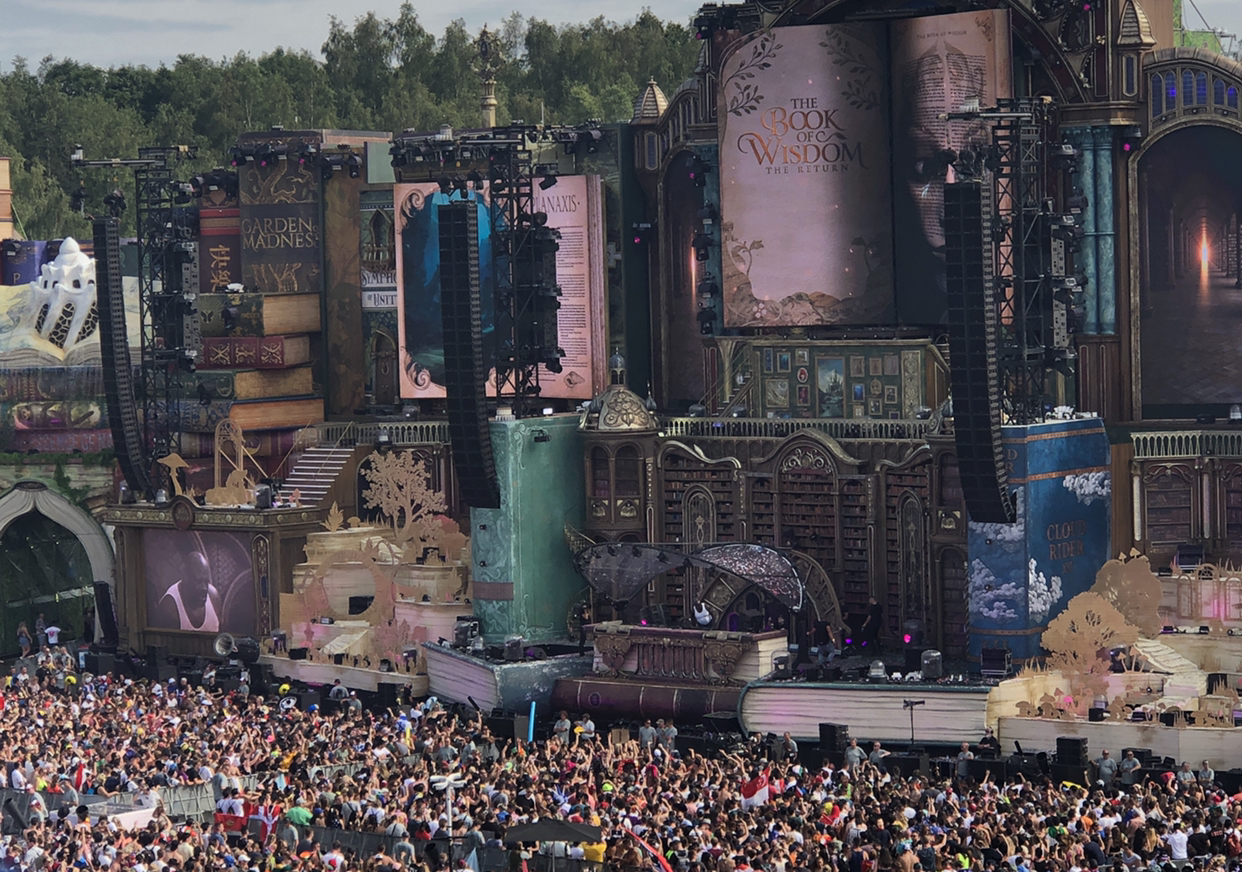 Tomorrowland celebrates the Fifteenth Anniversary with a recreation of The Book of Wisdom theme from the year 2012.

This year boasted one of the largest displays in history that showcased a background of books that paid tribute to prior themes and was equipped with a moving train centered around a book that opened and closed at the beginning and end of each day. As you looked up to the sky from the rolling hillside below, a book dedicated to the late Tim Bergling, better known as Avicii, caught the eyes of all. As acrobats performed high above the crowd as the next act was announced, attendees were swept away in a cloud of nostalgia and excitement. 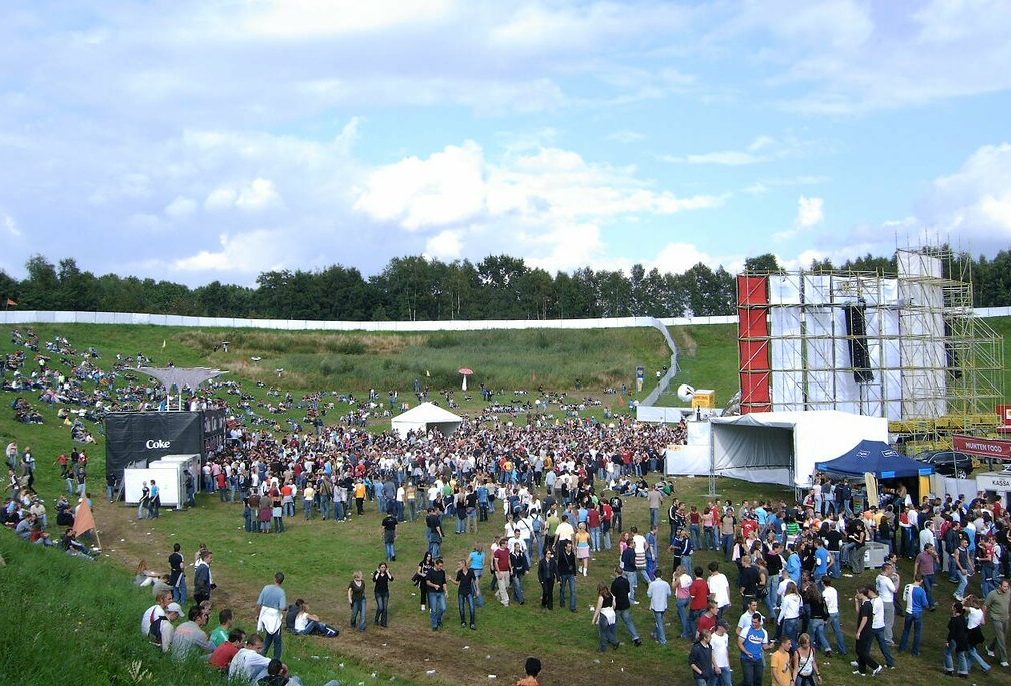 The first year of Tomorrowland was in 2005, at the same location in Boom, Belgium. Photo Credit: The Daily Michael.

Now let us briefly rewind to the year 2005, the year it all began on a sunshine-filled Sunday in August. Michiel and Manu Beers, brothers from Belgium, were avid club-goers in the ’90s and wanted to move away from the typical nightclub life and create an experience centered around music that also embraced the outdoors during the daylight. With influences from other European festivals such as Mysteryland, the Beers brothers created Tomorrowland.

With humble beginnings, Tomorrowland hosted just five stages with a Mainstage design that consisted of vinyl banners held together by scaffolding. Rather than the three-day, the two-weekend festival we know today, Tomorrowland came to life on a single day with twenty-seven headliners and 8,000 guests at De Schorre Park in Boom where the festival continues to be held. At the time, Tomorrowland did not have a theme and organizers gave tickets away for free to bring more guests on site. Taking the stage at the 2005 festival included appearances by Armin van Buuren, Sasha, and David Guetta, all three of whom were top-ranked DJs by DJMag that year. When it came to the camping, guests brought their own tents and camped right in front of Mainstage. 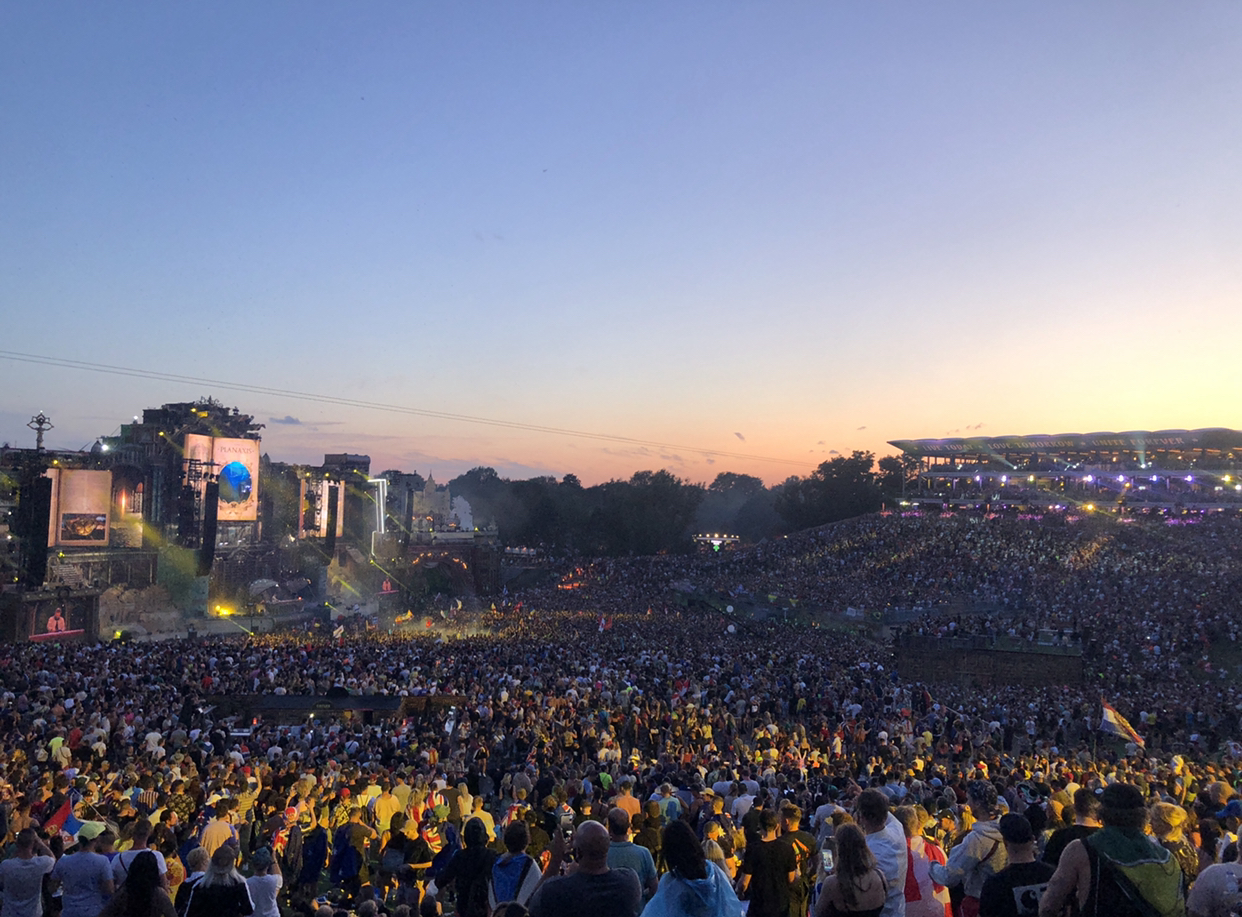 Mainstage Tomorrowland as the sunsets.

Fast forward to 2019, the festival has reached its fifteenth anniversary and is now called home to 400,000 people across the globe. To celebrate, Tomorrowland creators elevated the festival to new heights for this year including the debut of Tomorrowland Winter. As a kick-off for the big anniversary return, Tomorrowland Winter featured the theme The Hymm of the Frozen Lotus and welcomed 30,000 guests to the gorgeous French Alps during the wintry season of March. 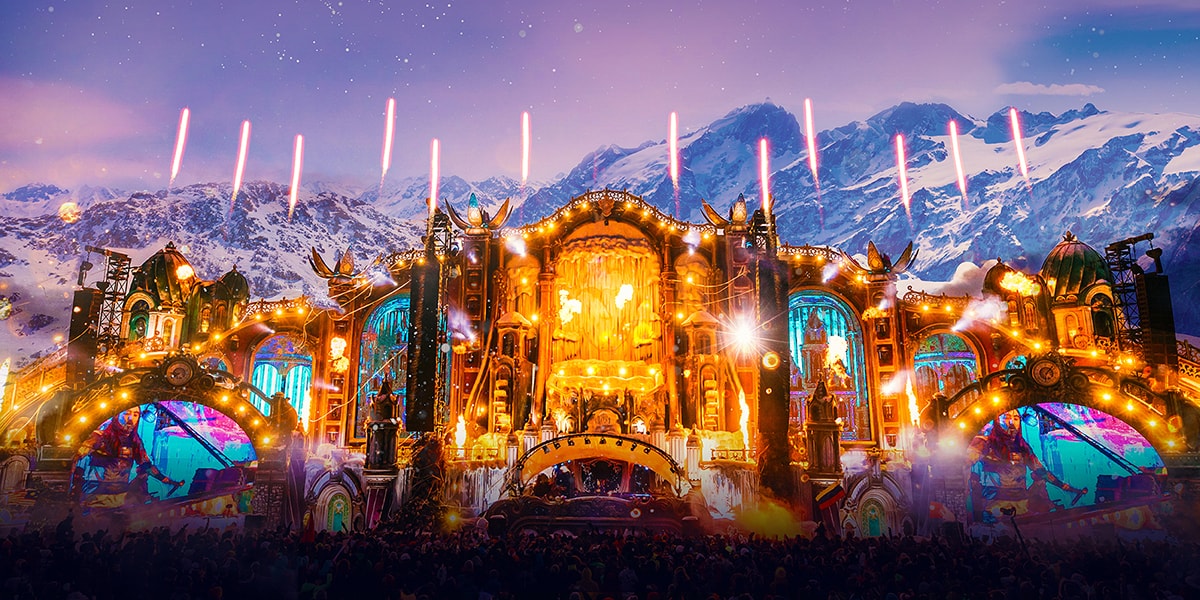 Attendees bundled up for the cold and came equipped with ski gear to navigate their way amongst the stages. The week-long event featured headliners including NERVO, DJ Snake, Afrojack, Steve Aoki, Armin van Buuren, Dimitri Vegas & Like Mike, Martin Solveig, Martin Garrix, and of course, David Guetta (the only DJ to play every single Tomorrowland event in history). Tomorrowland Winter was such a success that the festival will return next year during the week of March 14th to March 21st, 2020.

For the official anniversary extravaganza during July, Tomorrowland returned with several exciting additions, new stage layouts, and exclusive celebrations tied into the anniversary. The festival with the camping options sold out with hours, with the entire festival selling out within days to make for the largest year yet. As you entered the festival campsite at Dreamville, you began your fairytale journey as you walked through a beautiful stained-glass entrance. Once on-site at the festival itself, guests were transported into another world with unique celebrations in various areas of the festival. 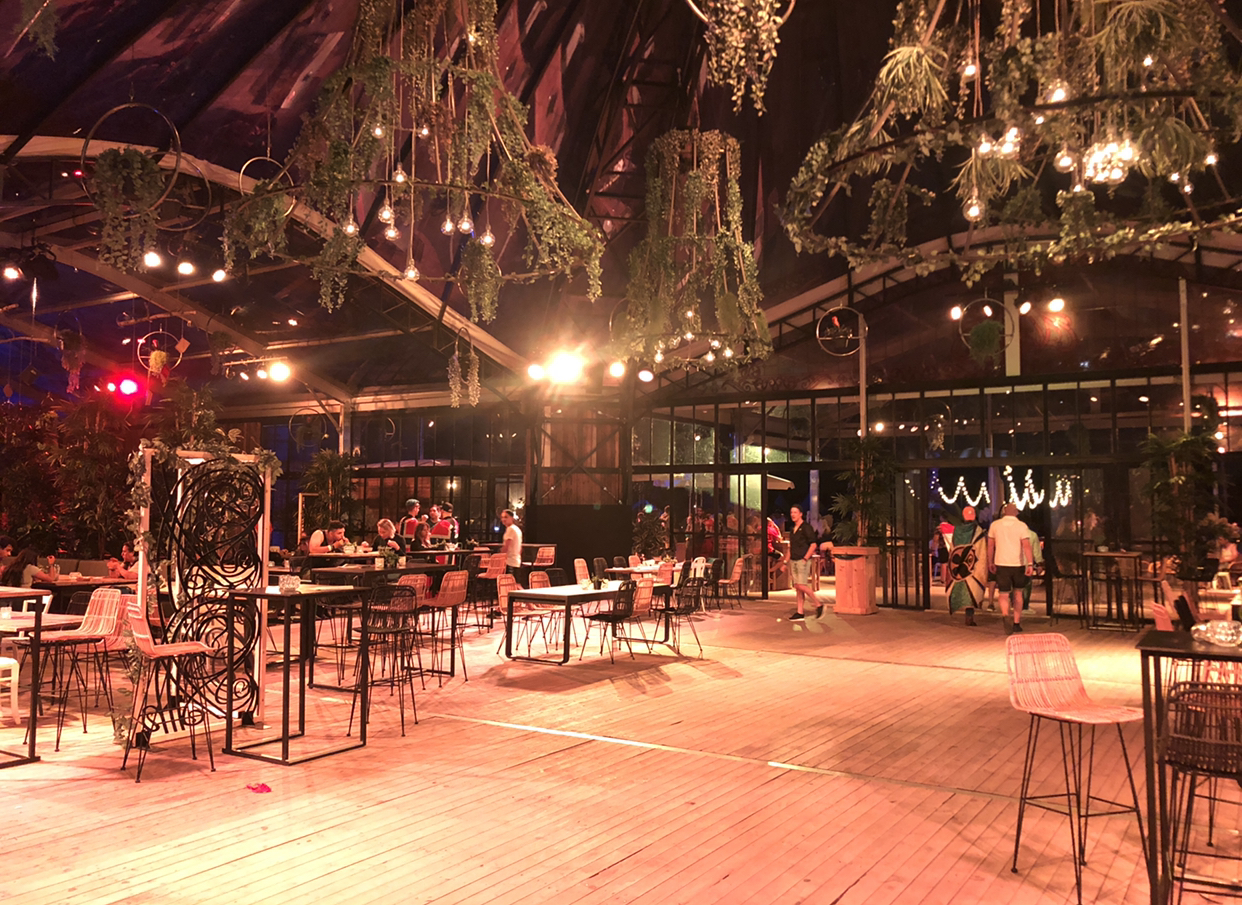 Dreamville entrance under a stained-glass sky.

This year, Tomorrowland featured seventeen stages (including the Rave Cave) with approximately 400 headliners. In stark comparison to the original festival in 2005, Tomorrowland has grown into the largest festival in the world. One of the most anticipated events of Tomorrowland this year was the Eric Prydz Holosphere debut, an extension of his popular HOLO showcase. To allow for this experience, the Freedom Stage was enlarged and expanded to include the Holosphere structure. They also welcomed L’Orangerie, a stage that was originally debuted at Tomorrowland Winter and replaced the floating Arch Stage. Also making its way from Tomorrowland Winter was the Lotus Stage, which replaced the previous Organ of Harmony. 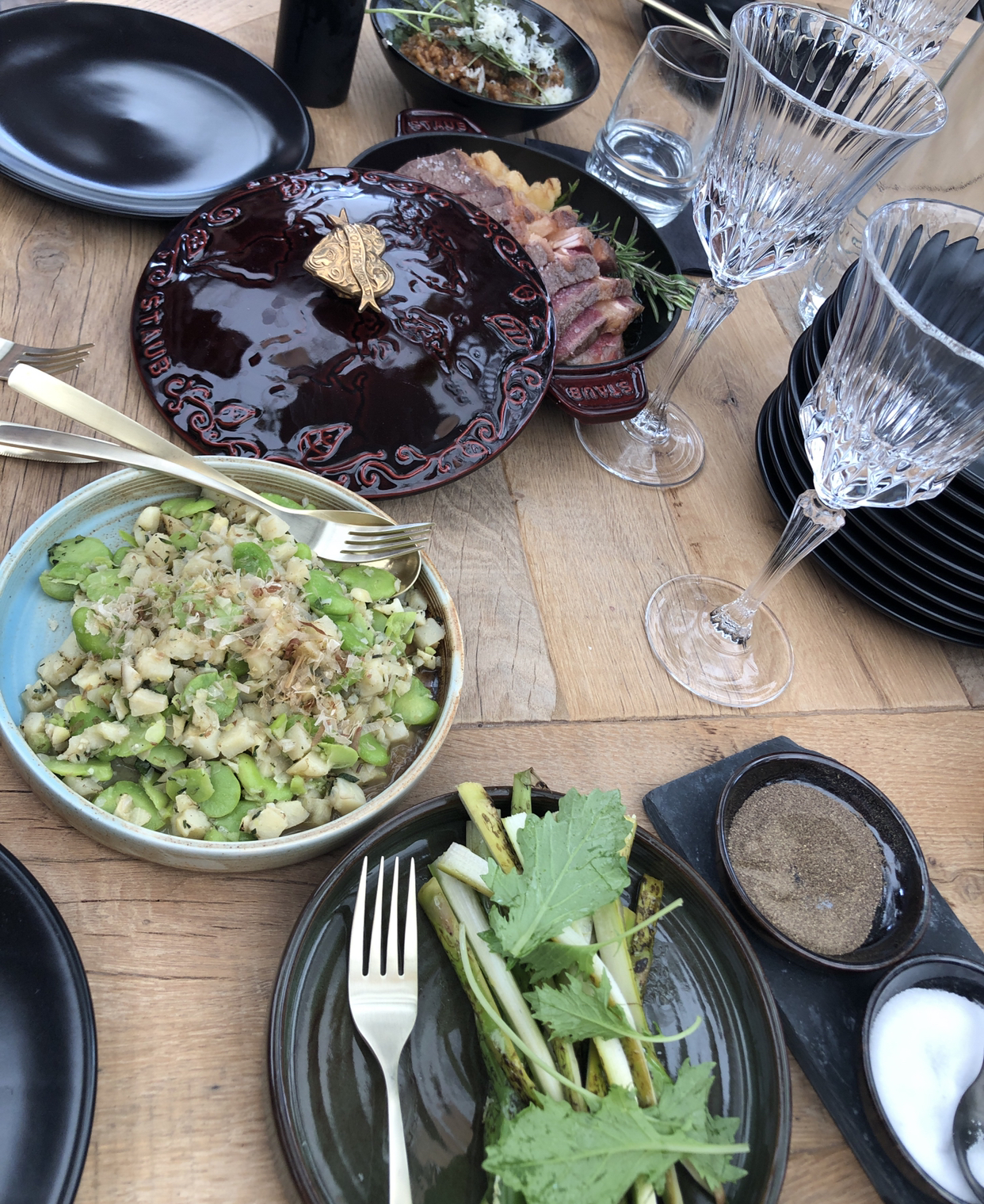 World-class cuisine prepared in custom Tomorrowland dishes at the opening of Mesa.

This year marked the opening of Mesa, a five-star restaurant based in Belgium that operates as a shared dining concept where you are matched at a table with attendees from all parts of the world. While you came in with an empty stomach, you left with a fulfilled heart as you made lifetime friends. At B-Eat, the only stage in the world to concurrently host both a world-class DJ and chef, guests danced while enjoying the exquisite food prepared by legendary Las Vegas chef Joel Robuchon. At the end of the meal, guests were treated to a surprise champagne toast and a mouthwatering, five-foot-tall anniversary cake. 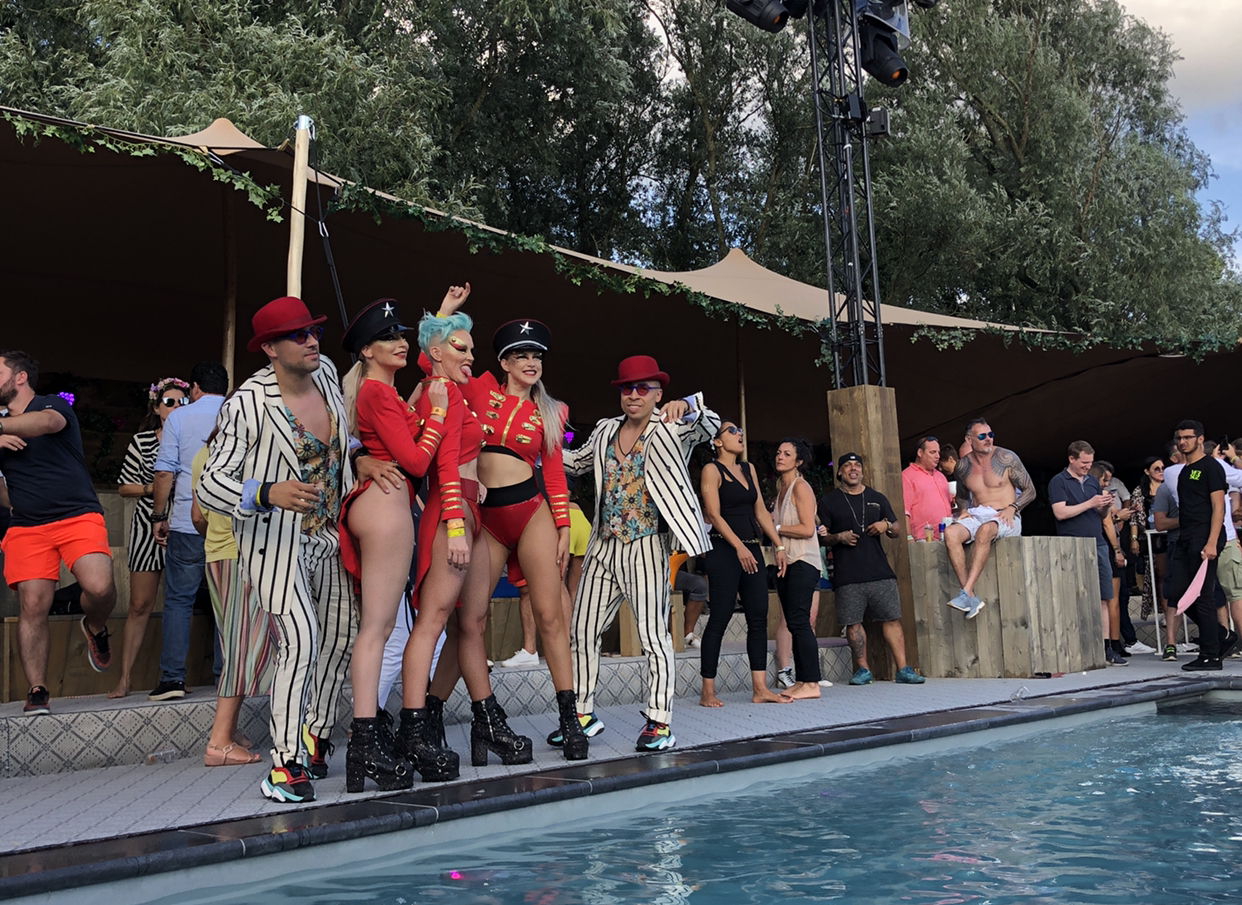 Dancers and guests gather around the pool at the Lost Frequencies & Friends Stage.

As the party continued into the night, the festival paused for the first-ever performance on Mainstage by The Metropole Symphony. As part of their Symphony of Unity showcase, a sixty-piece orchestra performed popular electronic music from years past and present. To witness this event was otherworldly as you were transported to another place entirely while being filled with an array of emotions. As the weekend came to a close, attendees celebrated the closing of this chapter with a surprise performance by 3 Are Legend, a supergroup comprised of Steve Aoki with Dimitri Vegas & Like Mike. 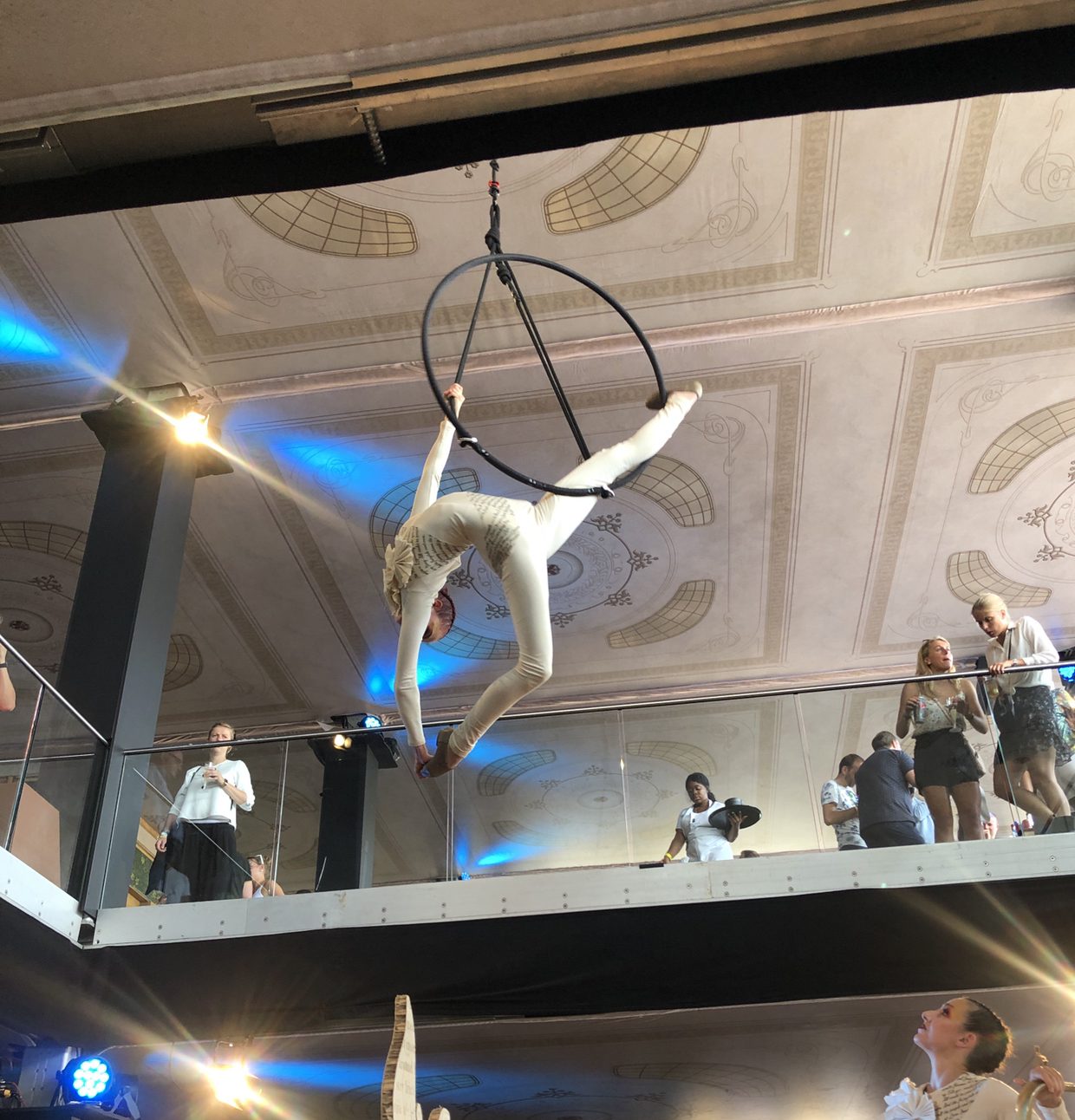 Tomorrowland performers take the stage in the VIP lounge.

Although the anniversary took place in July, the electronic music community has continued to honor the fifteenth anniversary of Tomorrowland. This year at the 2019 Amsterdam Dance Event (ADE), Tomorrowland celebrated at the Ziggodome with a spectacle perfectly fit for the Fifteenth Anniversary.

“Our Story”  brought in a live orchestra in a stadium setting, which featured Tomorrowland icons Afrojack, Armin van Buuren, Dimitri Vegas & Like Mike, Goose, Netsky, Steve Aoki, The Bloody Beetroots and Tiësto. Backed by The Metropole Orchestra, the DJs played some of the most iconic Tomorrowland anthems for thousands to dance and celebrate. “Our Story” paid special tribute to Avicii, with spectacular indoor fireworks, tons of confetti and performers. 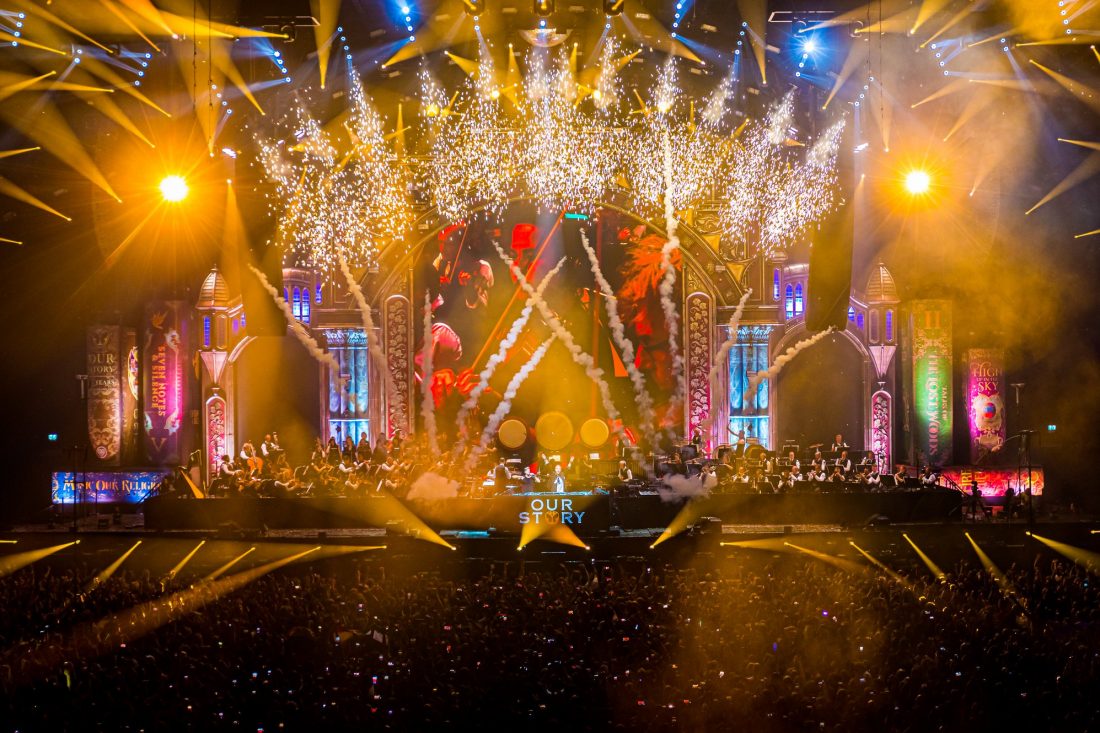 Tomorrowland celebrates its Fifteenth Anniversary at the Ziggodome in Amsterdam this past October.

As the 2019 year ends, we look forward to the future of Tomorrowland while remembering the fond memories we have made over the last fifteen years. With the second year of Tomorrowland Winter, the celebration of the theme The Book of Wisdom continues with The Frozen Chapter. As for Tomorrowland in Belgium, get ready for the ticket sales in January as you gear up for the experience of a lifetime!

We expect Tomorrowland to continue its trend of pushing boundaries with festival production and curating overall experiences that inevitably turn into heartfelt memories. Tomorrowland has recently released the theme for this year as The Reflection of Love, with cryptic hints at the overall theme on their website. As we patiently await the surprises of next year, tune into the One World Radio station created for the anniversary and relive the moments of years past.

Until we see you next year, People of Tomorrow: live today, love tomorrow, unite forever!