Music is truly a universal language.

That is what is drawing thousands of people from around the world to Electric Daisy Carnival Las Vegas in June. EDC will be celebrating it’s 20th anniversary, so expect the biggest and best party to date!

It’s crazy to think that people will have traveled from all six continents just to get to EDC Las Vegas. That is true dedication. Dance music fans from all 50 states and 61 countries will be there. California, Nevada, Texas, Arizona and Colorado send the most attendees to EDC.  The festival also sees the largest international crowds from Canada, Australia, the United Kingdom, and Mexico.

This year 32 languages will be spoken at EDC. The most spoken are English, Spanish, Chinese, French and Arabic. Some headliners will be traveling from as far away as Singapore, which is 8800 miles away!  Once they arrive to the Las Vegas Motor Speedway, they will be treated to new stage designs and a lot of surprises!

In an ongoing series, Insomniac.com will tell the stories of unique fans planning their journeys to EDC Las Vegas from every corner of the globe. In the first series installment, a devoted husband from New Delhi, India speaks of his plans to take his wife to EDC for the first time. Read more about the cross-continental journey – all for the love of dance music – HERE.

If you are planning on going to EDC Las Vegas in June, buy your 3-day pass NOW as they are almost sold out. You’ll totally regret not being there for the big 20th anniversary. You can purchase tickets HERE.

I can’t wait to be back in Las Vegas for EDC and spending my birthday under the electric sky! 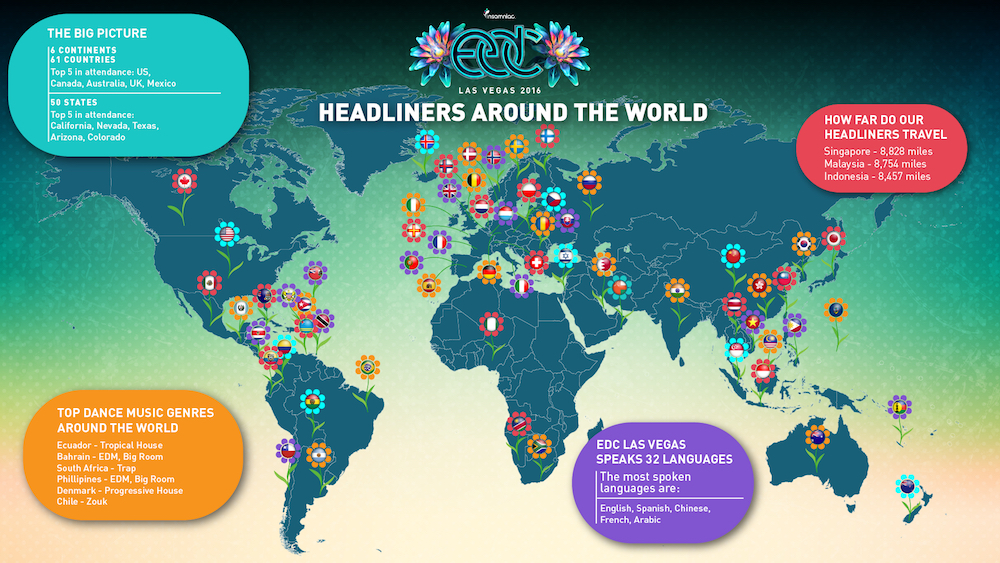 The End of Avicii: The End Of An Era?

Your Last Shot At Grabbing Tickets To Coachella 2016