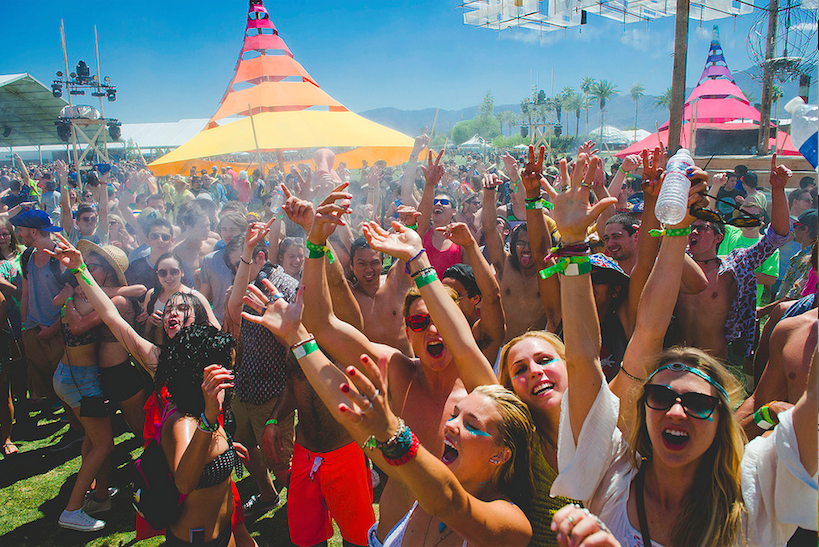 Festivals Aren’t Dead Despite What Veterans May Say

A few weeks ago, I was riding the subway home from the Hollywood Bowl after seeing Blur utterly destroy their set. Naturally, I was in the mood that usually comes after witnessing superb live music; a mood of utter joy and frivolity. I was humming the songs I had just heard in my head and desperately trying to associate newly acquired images with them.

Essentially I was on Cloud 9. Enjoying my own little world where I was watching Blur once again, cherishing the fresh memories for as long as they would last. Until I was removed from that world.

A man who was slightly older and quite a bit larger than me tapped me on the shoulder and said:

“Hey, so did you actually go to Symbiosis?”

The question was a result of the black zip up hoodie I was wearing, with the words “Symbiosis 10 Year Re:Union” printed on the back, and for a moment I was happy that this person had removed me from my 90s-late 00’s Britpop fueled fantasy.

Maybe this person had been to Symbiosis as well. If he had, I could happily relive the memories of my favorite festival, and explain that I wear this hoodie whenever the temperature drops below 70 degrees in an attempt to remind myself of the best weekend of my whole life.

“Hell yeah I did! What about you?” I replied just as the train reached my stop.

“No I didn’t go…” he’s cut off forcibly as he and myself leave the train with the rest of the passengers. Already I’m losing interest, but out of politeness I wait for the crowd to loosen and continue the conversation.

“…But I talked to my friend who went to Burning Man and Symbiosis, and he said I should go to Symbiosis because Burning Man sucks now.”

Immediately I regret the decision of letting this large, acne scarred person dressed in unfitting clothes remove me from my remembrance of Blur.

“Symbiosis wasn’t that cool,” I lied, “You should probably look into something else.”  I began to quicken my pace to avoid furthering the conversation, but not before my counterpart was able to say one more thing.

I didn’t respond, and all I could think was “good.”

You might be wondering why I lied. Well, I lied because its that guy and his friend that define the unfounded elitist views within the festival scene, and there’s no way I will contribute to their attendance.

This negative point of view of festivals can be broken down into two parts:

1. The subway guy’s friend. I obviously have never met this person, but the fact the he apparently said “Burning Man sucks now” is indicative of two things: that he had been to Burning Man several times, and that it didn’t used to suck.

First of all, I have several friends who went to Burning Man 2015 and had nothing to say but positive things. After all, it’s a festival, one of the most legendary on Earth as a matter of fact. What is there that is so bad about it?

Burning is definitely more intense than other festivals given its length (8 days), the raw desert setting, and the lack of the luxury food and water vendors, but as the subway guy’s friend said “it sucks now”, its clear he was not only aware of these logistical challenges, but he had traversed them on several occasions.

If he had gone to Burning Man for his first time, and not enjoyed it because of these things, that would be fair; it wasn’t his thing. However, what I can surmise as to what happened based on his scathing review is that he thinks the festival “sucks now” because of its new found popularity, which is inherently flawed.

The entire point of festivals (especially Burning Man) is that they are different every year. Different people, different vibes, different artists, different everything. The festival is the result of the people who attend it, and what they put into it. If you’re not willing to let go of one particular experience, and you’re not putting positive energy into the festival, you don’t belong there.

2. The second part is a much simpler problem, the subway guy himself.

He is part of an ever growing culture of negative impressionability that is seeping its way into the festival scene. He himself has never gone to Burning Man, and yet he now believes it sucks because of something his friend said. That is the complete opposite way to approach festivals.

Let’s say he does attend Burning Man next year. Because of his impressionability, his attitude going into the festival is already negative. This makes him more inclined to think like his friend because he has a preconceived idea that he already missed out on the best years.

As I stated before, festivals are the result of the people who attend them. The overall experience of everyone involved is a reflection of what everyone involved put into it, and the guy on the subway is already putting in negativity, which detracts from the festival as a whole.

You might be thinking this attitude is especially prevalent when it comes to Burning Man because of how old it is and how valued it is among regular attendees. However, at every other major festival I’ve been to that’s existed for more than three years, (except Symbiosis) there are the veterans who are holding on oh so tightly to that one year that changed their life.

The first major three day festival I went to was EDC Vegas 2012, the second year it was held it Vegas, and in the months leading up to it, all heard from the supposed “OG Plurlife” crowd was how much better it was in LA.

I wasn’t at LA, but I can say definitively that EDC Vegas does not suck. Raving from sunset to sunrise in a venue that is completely open, where you can find glorious talent from every genre of electronic music, does not suck. It’s different from LA, but it doesn’t suck.

Even at Coachella, which had been the one of the most mainstream festivals in the country long before I went for the first time in 2013, I hear about how “2011 was the last real year of Coachella,” and how “Coachella is dead.”  Coachella is not dead. If you went in the Yuma tent at all this year, you would know that. Coachella might be different from 2011, but its not dead.

All these festivals that are supposedly “dead” are just different, which if you’ve been reading, is the whole damn point. Every festival is different every year in almost every way. Different lineup, different layout, different lecturers, different production, and most important of all, a different crowd. Just because you were there first, it doesn’t make you an authority on what makes a festival good or not. People going for the first time are not experiencing a worse festival because you had tons of fun five years ago. Everyone’s entitled to an opinion, but don’t extend that further than your own personal experience.

So to all the new festies out there, do not let anything anyone (including the media) says about any festival influence your desire to attend. Festivals are some of the most subjective things on the planet. Even if all your friends had a terrible experience one time, if you approach the festival with an open mind and say hi to the person next to you, you could still have the best time of your life. Chances are if something about a festival sparked your attention, that’s where you belong.

Festival culture has only really expanded in the last five years, so you’re definitely not the only person “jumping on the bandwagon”, and I can assure you that the people behind these festivals are more than happy that their passion is extending to a larger percent of the population.

On the contrary, to all the people who think these festivals have died, do everyone a favor and don’t go next year. We’re fine without you. In fact, we’re better off.