Today, we are ecstatic to announce that our Techno brand, MANIAC BLVCK, will be making its livestream debut on Insomniac TV this upcoming Thursday, April 29. The special MANIAC BLVCK livestream event will be held from 10 PM PST – 12 AM PST and will be streamed exclusively on Insomniac TV’s Twitch and YouTube channels.

Having been established for just 6 months, MANIAC BLVCK has continued to show devotion to the deeper, darker sounds of House & Techno. The brand has hosted Green Velvet, Gorgon City, Julia Govor, and Solardo at The Venue ATX in Austin, Texas, and is expanding its digital presence by announcing the first MANIAC BLVCK digital livestream event, which will feature the debut of Junkie Kid’s underground alias, 91X, and Gerard Not Gerald (Incognito).

91X (Junkie Kid) grew up in Mexico before moving to Spain for 10 years. Moving at a young age allowed 91X to develop a taste for all sorts of electronic dance music. At just 16 years old, 91X began producing techno, trance, hardstyle, and house tunes before signing his first EP in 2013. Since releasing his first EP in 2013, 91X has attracted support from Tiesto, Hardwell, Afrojack, David Guetta, and others.

Gerard Not Gerald is another successful electronic dance music producer who has continuously pushed the limits of house and techno. Having shared the turntable with some of dance music’s initial colonizers, Gerard Not Gerald (Incognito) is known for his deep dark sounds, which will surely take fans down the rabbit hole into the underground world of Techno.

We are incredibly excited to have these amazingly talented Techno artists on MANIAC BLVCK’s debut livestream event. We can’t wait to show you what we have in store! Make sure you are following Insomniac TV on Twitch and YouTube to watch this special event on Thursday, April 29 from 10 PM PST -12:00 AM PST. 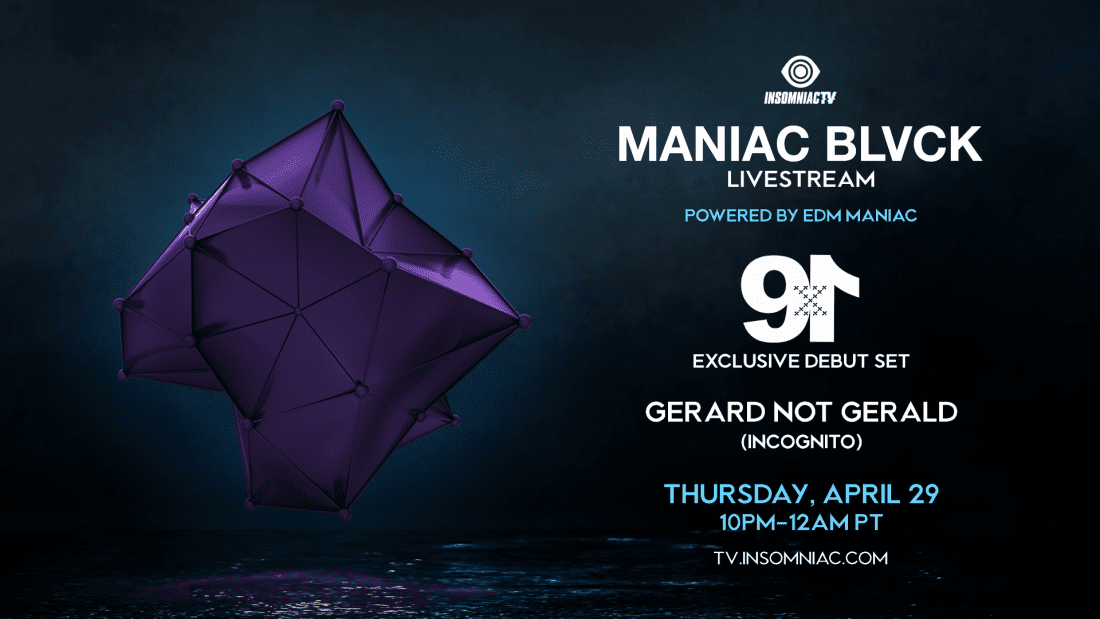