The Multiple Sources Of Negligence At Astroworld 2021

There has never been a topic so widely discussed in the world of music festivals as Astroworld 2021. In recent years, numerous deaths have unfortunately been reported at large-scale events around the world. Other events have been so horrendously run that attendees have been stranded in mud for days at a time with no access to water and other essentials.

Yet nothing compares to what happened at Travis Scott’s branded festival this past November. At the time of writing, 10 people have died as a result of the event. Eight deaths occurred on-site at the festival, with two more people passing away at hospitals in the days after due to extreme injuries. One of the victims was a nine-year-old boy.

According to Billboard, organizers are facing over 250 lawsuits, with plaintiffs seeking billions in total damages. One lawsuit alone is seeking $750 million, and Padua Law Firm is hosting online ads seeking injured parties from the festival to join a class action suit as hundreds of injuries occurred on-site as well.

After such a horrifying outcome, there surely needs to be consequences. Pre-pandemic, thousands of large-scale events happened every year without coming close to the level of death and injury that occurred at Astroworld. Clearly, negligence was happening in numerous aspects of the festival.

The question then becomes, whose negligence was responsible for the outcome? Only through answering that question can future tragedies like this be prevented. 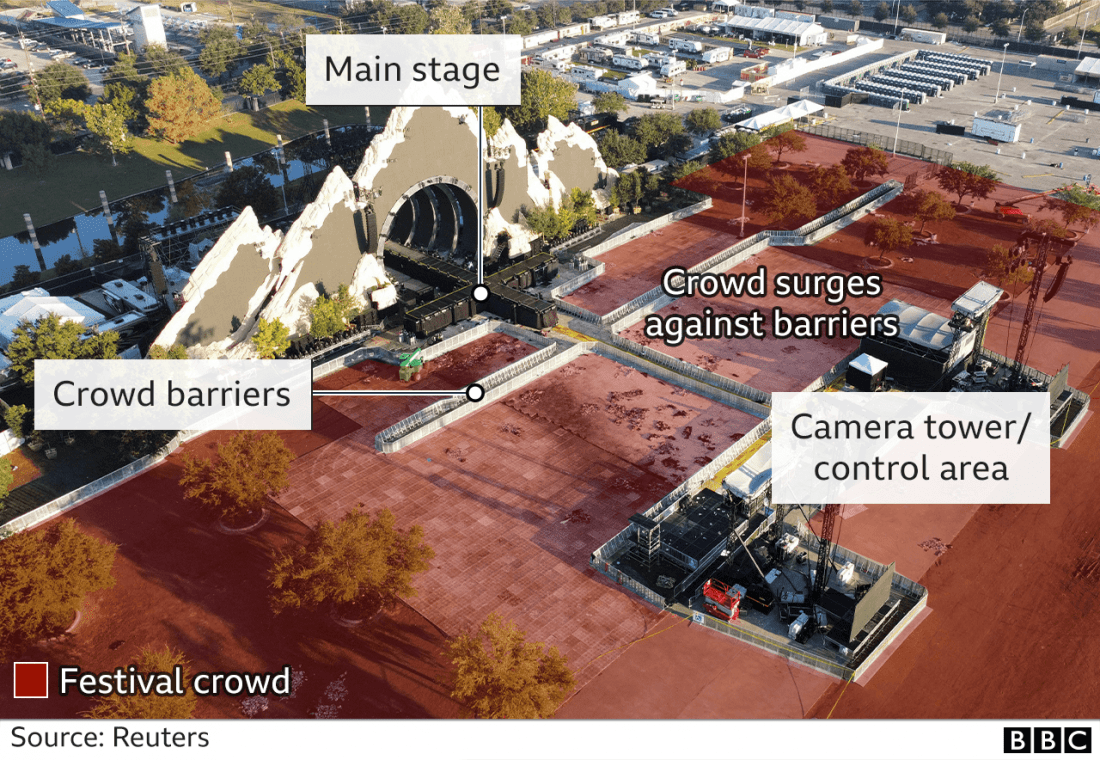 Travis Scott himself certainly deserves to be scrutinized for his role in the tragedy. For years Scott has goaded his fans into engaging in dangerous behavior at his concerts for his own selfish reasons.

At a concert in New York in 2017, a fan was paralyzed after being pushed off a third-floor balcony. Scott told fans in the balcony that people on the floor would catch them if they jumped.

Following a May 2017 concert at Walmart Arkansas Music Pavilion in Rogers, AK, Scott was charged with inciting a riot, disorderly conduct, and endangering the welfare of a minor after asking fans to overpower security and come on stage. He did the same thing at Lollapalooza in 2015,  and once again faced criminal charges. That was over six years before Astroworld 2021.

With so many examples over such a long period of time, it’s clear Scott has a pattern of disregarding the health and safety of both his fans and event staff. He was the headliner at Astroworld. 50,000 people were there to see him. Artists deserve to revel in the energy of the audience, especially at their own festival. Just not at the price of life.

At the end of the day, Scott is being nothing but selfish. He knows many of his fans will follow his pseudo orders, and he continues to push them into dangerous situations anyway. He asks them to rage, and they do. In this case, “raging” translated into rushing the stage, and at least ten people will never be able to rage again as a result.

While Scott’s actions are certainly reprehensible and reckless, he was not seeking for anyone to be hurt during his set or during the event as a whole. To voluntarily enter a massive crowd like the one at Astroworld incurs risk, and this is where the organizers can play a role in preventing bodily harm.

It’s important to note, that organizers can not eliminate the possibility of injury and death, they can only do their best to prevent it. However, based on reports from law enforcement, event staff, local news, and fanmade videos, it’s clear festival organizers Live Nation and ScoreMore did not do everything in their power to prevent such a tragedy.

First and foremost, hosting Astroworld as an all-ages event was incredibly irresponsible. Scott’s history of disregarding his fans was well documented, and environments wherein people are engaging in such dangerous behavior are no place for minors.

Even if it wasn’t Scott’s festival, modern rap music is known for its aggression. Crowds frequently mosh as if they were at metal performances. Large-scale events with rappers as the main crowd draw should be 21-and-up. No exceptions.

In terms of the actual logistics and execution of Astroworld, an article in The Austin Chronicle notes that organizers had no contingency for crowd surges. The article goes on to state that executives from other large-scale promotion companies have claimed many events don’t have specific plans for crowd surges, but they also say at least one company trains employees for surges before all large events.

If one company has the foresight to prepare for crowd surges, then Live Nation, the largest concert promotion company in the world, should be preparing as well. They need to lead by example.

Another area where organizers did not lead by example was allowing Astroworld to continue after it was declared a mass casualty event. The official declaration came from police at 9:38PM after a warning at 9:11PM. Scott continued to perform until his scheduled end time of 10:15PM.

According to the same article in The Austin Chronicle, only the executive producer and festival director had the power to end an event early. Obviously, neither of those people exercised their power after Astroworld was declared a mass casualty event by authorities.

Another example of negligence that can’t be discounted came from none other than the attendees themselves. As dismal as Scott’s reputation is for causing harm to his attendees. As unprepared as Live Nation and ScoreMore were for a crowd surge, there was nothing forcing the attendees to rush the stage when Scott started performing.

There are videos from earlier in the day that show members of the crowd rushing the gate, running over other people to get in. Such behavior demonstrates two things: people don’t respect the authority of the event, and they don’t care about the people around them. Put those people in front of an artist who doesn’t care about their well-being and the effect is compounded.

Attending a music event, people would like to believe that those around them generally have their best interest in mind. Maybe there are some annoying shoulder rubs in thick crowds, but if someone is legitimately in distress, ideally everyone can come together to make sure they’re safe.

At Astroworld, that was not the case. The idea of being a few inches closer to the stage trumped safety. Not across the board. There are also videos of attendees begging a cameraman to stop the show because someone was dead in the crowd. People were clearly concerned about what was happening, but there were too many people who weren’t.

It is not the job of an EDM blog writer to offer solutions on how to care about other people. Because it’s the same rules at shows as it is out in the world. If these people at Astroworld didn’t learn that from their parents, their teachers in school, their friends, hopefully the aftermath of Astroworld will be the wake-up call they need.

Moreover, because this is the most widely discussed event in the history of modern festival culture, hopefully, the news reaches the ears of the entire live music community. These types of tragedies happen at festivals of all genres, in all parts of the world. Everywhere there is a massive crowd, this danger is present, and the danger comes first and foremost from the people in the crowd.

Hopefully, everyone understands that after almost two years of no events, the last thing people want is to feel unsafe in a place where they are supposed to have fun. One individual can’t control a crowd of 50,000 or force an event to change their safety practices, but they can decide to treat the people around them with respect.

It sounds simple because it is. Be respectful, and chances are no one will die. Perhaps that wasn’t a concern before Astroworld, but now it has to be.

Boris Brejcha Is Back With His Tenth Studio Album, 'Never Stop Dancing'