ULTRA Europe has announced their lineup for their fifth-anniversary event in Croatia taking place July 14-16.

Some of the biggest names in house and techno will be at the RESISTANCE stage including Adam Beyer, Carl Cox, Joseph Capriati, Marco Carola, Nicole Moudaber and some back-to-back sets with Nic Fanciulli b2b Eats Everything, Sasha & John Digweed and Seth Troxler b2b The Martinez Brothers.

There will be four stages in and around Split’s Poljud Stadium. In addition to the mainstage and RESISTANCE stage, the UMF Radio Stage and Arcadia Spectacular ‘Afterburner’ are set to return.

Early Bird tickets are sold out but there are still tickets remaining at €169, then the price will increase to €199.

You can grab tickets for ULTRA Europe HERE. Check out the trailer and full lineup below! 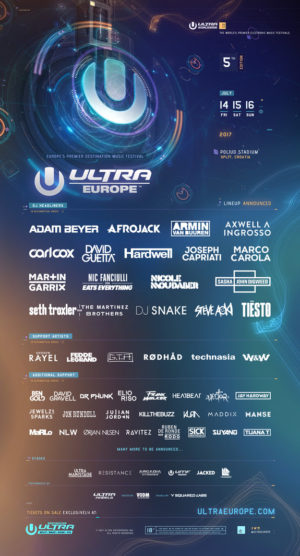 Source: Get In PR

byDanielle Evans
We use cookies on our website to give you the most relevant experience by remembering your preferences and repeat visits. By clicking “Accept”, you consent to the use of ALL the cookies.
Do not sell my personal information.
Cookie SettingsAccept
Manage consent