Event promoters and large scale promotion groups have dominated the festival circuit for years. But artists themselves are taking back control, and in turn, founding their own festivals, allowing fans to enjoy new acts in venues around the world. Artist-curated festivals aren’t a revolutionary concept, but they have steadily gained more influence throughout the years, attracting fans and bending the traditional rules of what makes a festival succeed.

These 6 festivals exemplify the advantages and successes that have brought the idea of artist-curated events to the center of the dance music industry.

In 1999, The Disco Biscuits sought to redefine traditional festivals by striving to combine improv rock and electronic music. Their fan base had grown, but they were still booking 12 PM sets at major festivals, unable to generate new fans at their performances. The Biscuits’ solution was simple: create their own festival. Thus, Camp Bisco was born. Taking place in Scranton, PA, the festival has hosted a number of huge acts, from Marshmello to Bassnectar. With over 16,000 people in attendance last year, Bisco’s numbers are steadily growing, proving it to be a festival to see.

Sled Island Music and Arts Festival is an annual independent event which seeks to place its artists in direct control of curating performances and selections. Each year, the Calgary, Alberta based festival chooses a guest curator to develop the lineup for that year’s event. 2017’s festival is the brainchild of Flying Lotus, who’s also set to headline the show.

Touring festivals, while less common than their single location counterparts, give fans the opportunity to witness an array of acts in various arenas. Pretty Lights has capitalized on this idea, creating his Episodic Festival Series. Each “episode” in the festival series takes place at a different, breathtaking location, with his sixth installment finding its home in Washington State’s Gorge venue (August 4th and 5th). Besides a live set from Pretty Lights himself, the festival will also host an array of other live acts, from Tipper, to Manic Focus, and STS9.

Dirtybird Campout, Claude VonStroke’s curated festival, is a blast from the past, providing summer camp nostalgia to all of its guests. In addition to competing in talent shows, color wars, and endless campfires, VonStroke aims to provide the best entertainment through a series of amazing performances from DJs throughout the weekend. With past impressive lineups that have included Mr. Carmack and Green Velvet, and mouthwatering barbecue, a signature delicacy of the DirtyBird Crew, fans are sure to enjoy the festival at all of its amenities.

Inspired by the melting pot of different cultures, styles, and music that influenced American society, Jay Z founded Made in America as a way to showcase genre-bending acts and performances. In 2012, Made in America debuted at Ben Franklin Parkway in Philadelphia, Pennsylvania. Boasting $5 million in ticket sales and attracting nearly 80,000 people, the event was an instant success. Today, the festival has curated performances from Martin Garrix, Lil Wayne, Jamie xx, and Bassnectar, to name a few.

It’s safe to say that Pretty Lights has turned the concept of touring into a carefully curated, heavily planned traveling festival show. Aside from his Episodic Festival Series, which brings two-day festivals to different venues around the country, Pretty Lights recently announced his latest event, a multi-day festival called “Island of Light”. The fest is scheduled to take place December 7-10, 2017 in Fajardo, Puerto Rico, boasting an epic first-year lineup alongside a spectacular exotic location. In addition to three nights of Pretty Lights, the festival will also feature performances from Gramatik, Tycho, Atmosphere and more. 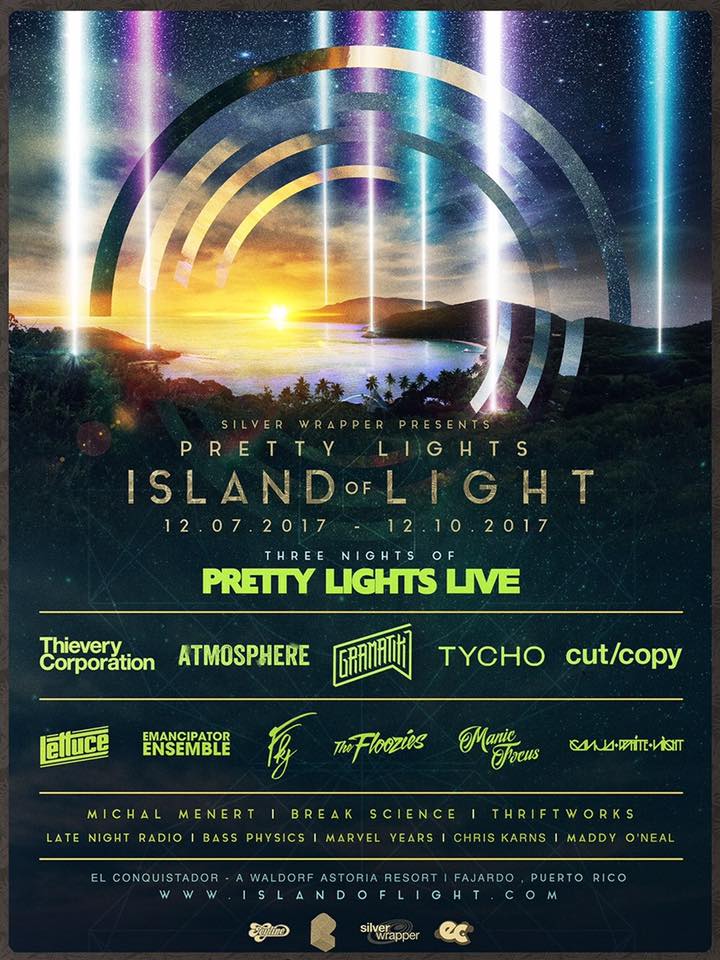 Featured photo by Get Tiny Photography

Have We Reached Our 'Peak Festival Era'?